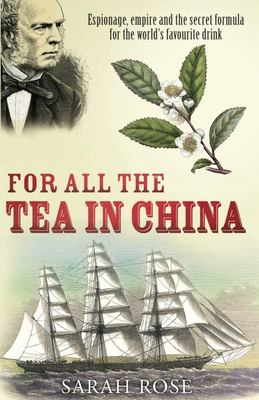 For All the Tea in China: Espionage, Empire and the Secret Formula for the World's Favourite Drink

Robert Fortune was a Scottish gardener, botanist, plant hunter - and industrial spy. In 1848, the East India Company engaged him to make a clandestine trip into the interior of China - territory forbidden to foreigners - to steal the closely guarded secrets of tea. For centuries, China had been the world's sole tea manufacturer. Britain purchased this fuel for its Empire by trading opium to the Chinese - a poisonous relationship Britain fought two destructive wars to sustain. The East India Company had profited lavishly as the middleman, but now it was sinking, having lost its monopoly to trade tea. Its salvation, it thought, was to establish its own plantations in the Himalayas of British India. There were just two problems: India had no tea plants worth growing, and the company wouldn't have known what to do with them if it had. Hence Robert Fortune's daring trip. The Chinese interior was off-limits and virtually unknown to the West, but that's where the finest tea was grown - the richest oolongs, soochongs and pekoes. And the Emperor aimed to keep it that way.

Sarah Rose is a writer living in New York. She was educated at Harvard and the University of Chicago.