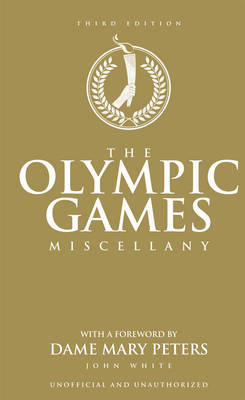 The Olympic Games is the world's biggest sporting extravaganza with athletes from more than 200 countries either attempting to qualify for, or actually compete in, more than two dozen sports over three weeks. There are hundreds of stories from the Games, stretching back to the end of the 19th century, tales of bravery, misery, joy and despair, together with thought-provoking lists and records. The Olympic Games Miscellany is not a history book, a biography, an encyclopedia or a records book, but it is a little bit of all of them. All true sports fans will enjoy dipping into these pages and learning about some of the greatest athletes ever to have taken the Olympic Oath.

John White is a lifelong sports fanatic who has devoted all his spare time to compiling an impressively comprehensive computer database of sporting facts and figures. He is the author of all the books in Carlton Books' Sports Miscellany series. An Irishman from Belfast, he has ardently followed the Olympic Games since his compatriot Mary Peters captured the hearts of the watching millions at the 1972 Games in Munich.